Mission to Sleep: To Crib from Rock 'n Play in 1 Day

If there's one device that moms everywhere have developed a love hate relationship with, it's probably the Rock 'n Play Sleeper. If you don't know what it is, here's a picture (complete with non-realistic well rested mom)... 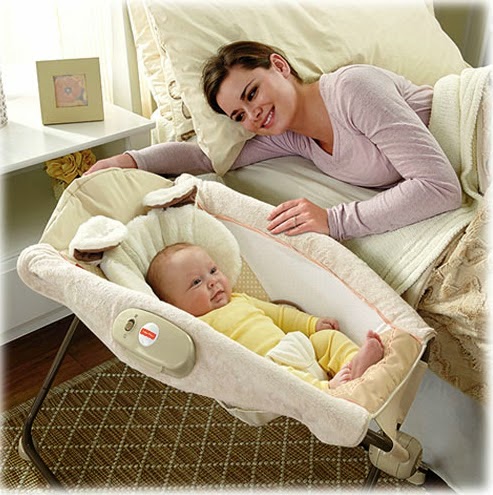 Why Love? Only because it is the most versatile, portable, inexpensive, magically calming, life saving, miraculous baby device on the market! Seriously, if you are having a baby or giving a baby gift, this is THE ONE thing to have...the perfectly angled bed, the soothing vibrations at the mere touch of a button, the snuggly sides that keep baby cozied up and reassured anytime they wake themselves up with their startle reflex mid-snooze, and the fact you can tote it anywhere from bedside to shower side so you can make sure baby is safe at all times and actually get some shit done. The list goes on...

Then, why on earth Hate? This thing is like crack for babies! Unfortunately, with a 25 lb weight limit, they can't just sleep in it forever, and there's no shortage of horror stories from moms who've tried to transition their babes from RNP to crib. I don't blame these babies for rebelling when the switch is made. I mean, who wants to give up all the coziness of the RNP for a big ole empty flat boring crib?

A couple things I should state for the record. There is some controversy on if/how much you should allow your baby to sleep in a RNP. Among them, things like flat head, torticollis, and upper airway obstruction due to the inclined nature are noted by some doctors as possible risks. These are serious things to consider of course. On the other hand, the RNP is very commonly recommended by many pediatricians, especially to parents of kiddos with acid reflux, due to the exact same characteristics in design. So is it safe? My pediatrician said absolutely it's fine. In fact, she recommended not even attempting the transition from RNP to crib this early. I was shocked to hear her say that actually.

I am certainly not smarter than our pediatrician, but I will say that the bigger Preston was becoming the more I felt the urge to go ahead and transition to crib now. His feet and legs were becoming more scrunched at the end to where he was sleeping in a squat position. While this doesn't pose a risk, I didn't want him to get to used to that position. Most concerning was the fact he'd become so heavy (he's now over 15 lbs!), the support was starting to sag and I noticed his head began to slump forward during sleep more. I was having a hard time sleeping as well, because I was so worried about watching his breathing like a hawk when he was in it. It was time to make the move to crib.

And because there are so many horror stories out there about making the switch, I wanted to share our personal experience...It was not bad at all! I really think it went smoothly because we didn't just move him into a completely different room, and throw him into a completely different "feeling" space to sleep. Some people may be able to do that with success, but I don't think our guy would have gone for it one hot minute.

Before the actual crib transition began, we moved his RNP into his nursery a month ago and kept it right next to his crib. This way he became very familiar with his own room and the view he'd have from his crib. We used a portable mobile to hang above the RNP from time to time so that he'd get used to seeing that above his head as well. Then the time came to make the big move. So without further adieu, here's what worked for us...


1) Propped the crib up on one end using books. This gave an inclined feel to his new sleeping space. While it wasn't quite as angled as the RNP, it definitely wasn't flat. Over time, we will remove one book at a time, so that he won't feel such a drastic transition to a completely flat mattress.

*We've already removed one book and will remove another tonight. 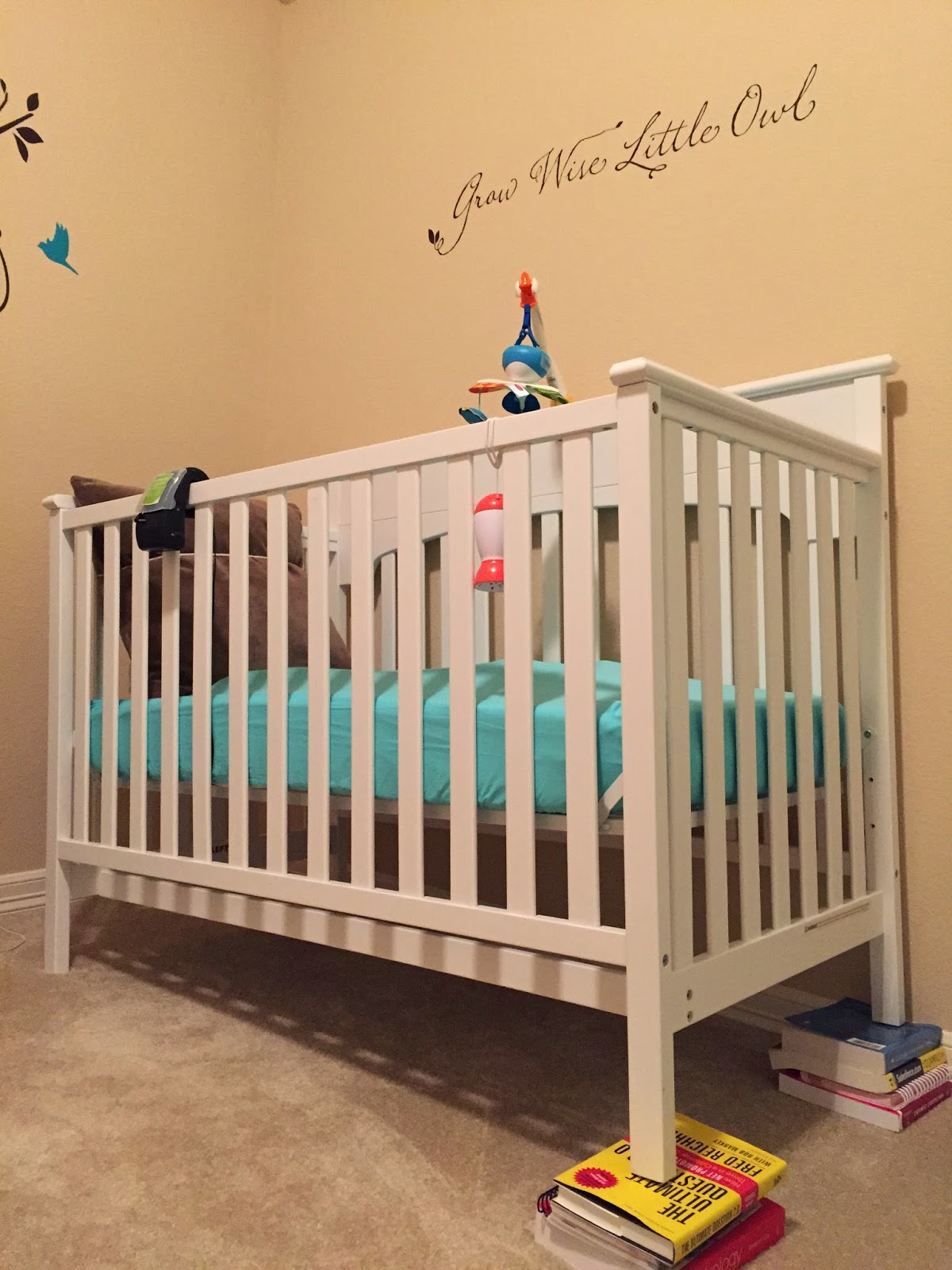 2) Made a "snugglenest" using a rolled up beach towel. We placed this under the fitted crib sheet in the middle of the crib. This way, it wasn't such a big wide open space, and he still gets a cozy feel when he moves about. There are no loose blankets, so it's perfectly safe. Over time we can replicate with smaller (thinner) towels to lower the height of the snugglenest until it's taken away completely. 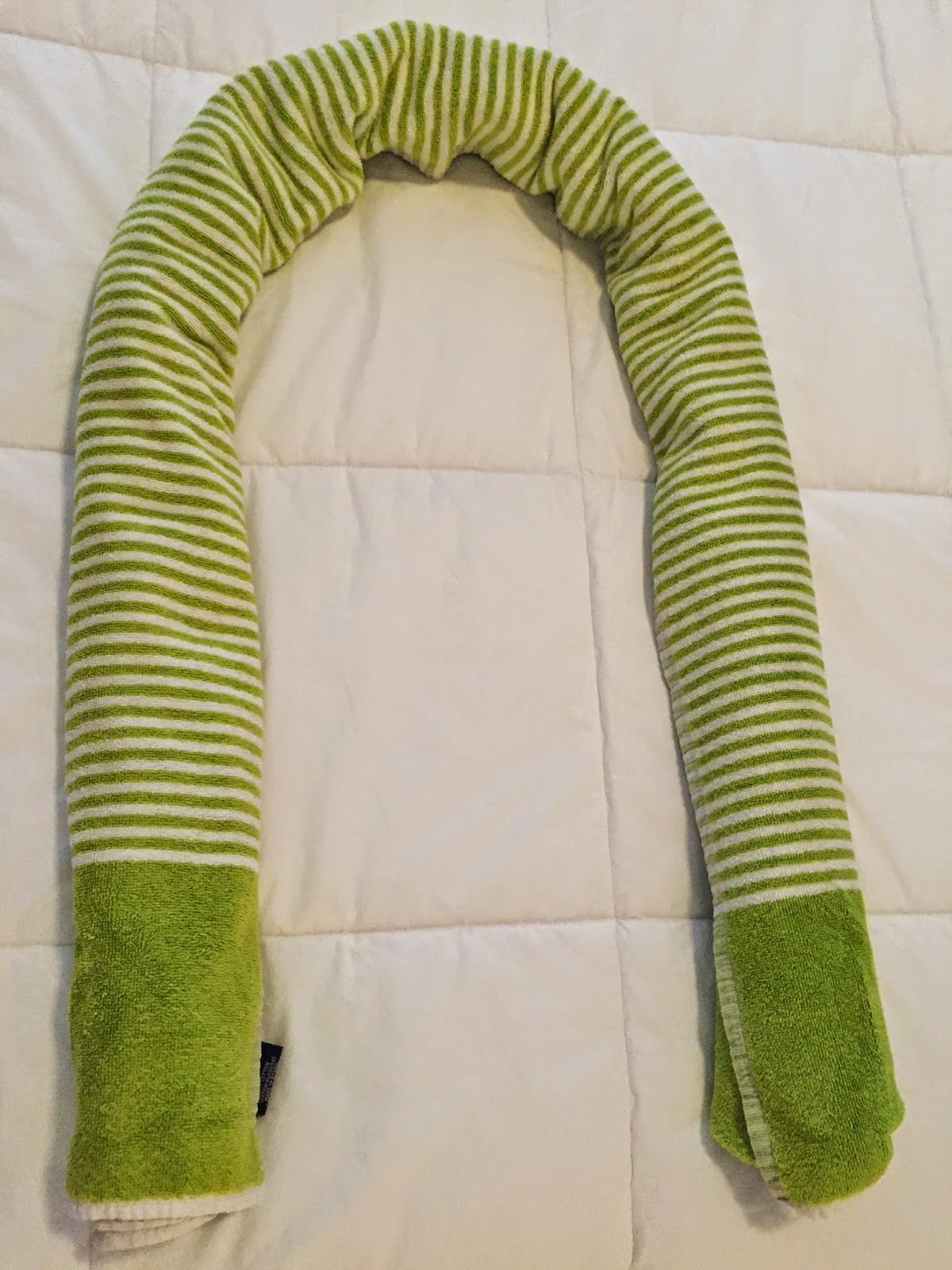 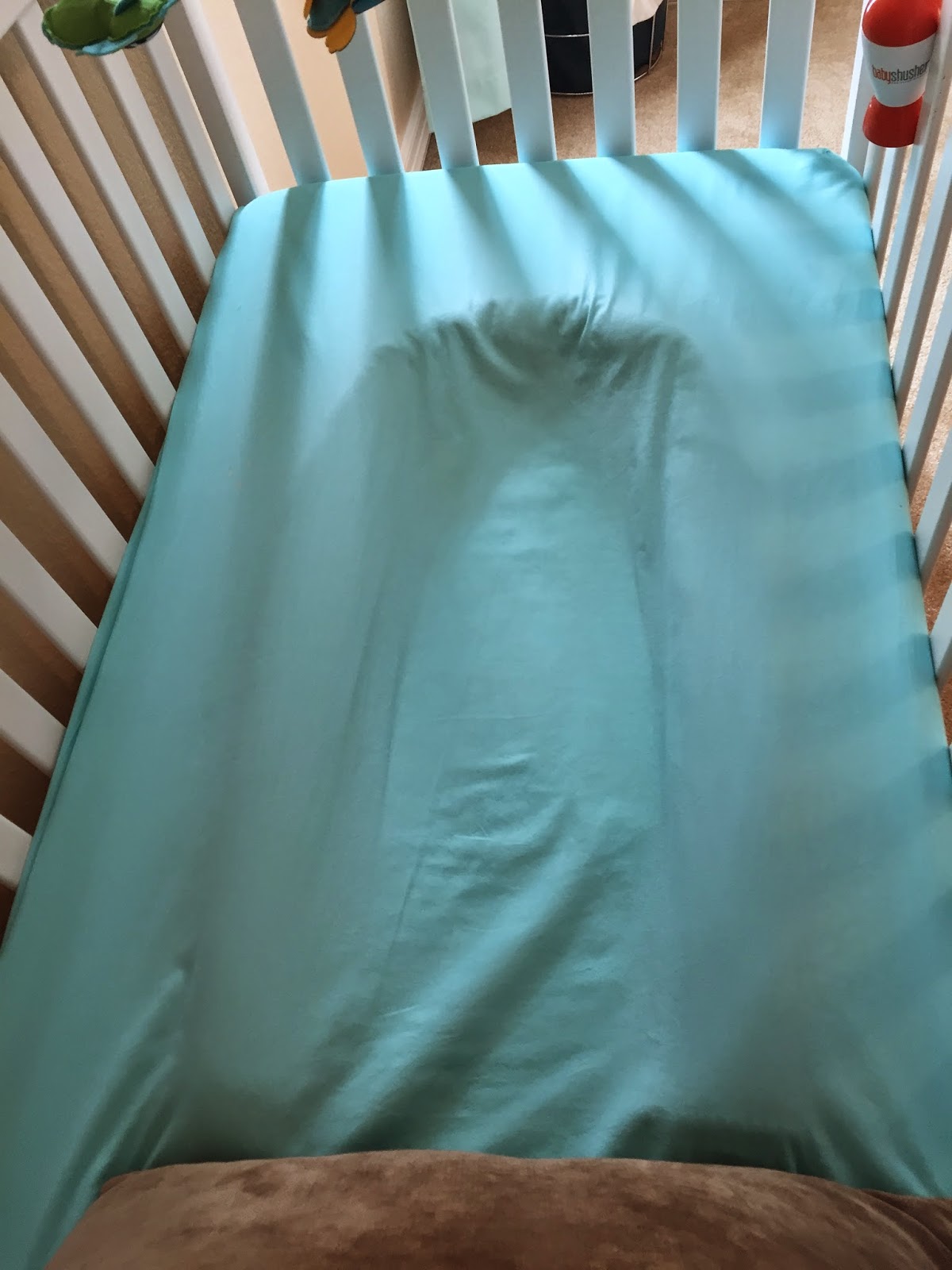 3) Placed a large firm throw pillow at the end of crib near feet. This way if he slid downward or kicked his feet, which he did a lot in the RNP, there would be something there to provide soft resistance instead of just crib rungs or empty space. We tied the pillow to the crib rungs firmly as well, so if he kicked, the pillow would not fall back onto him. 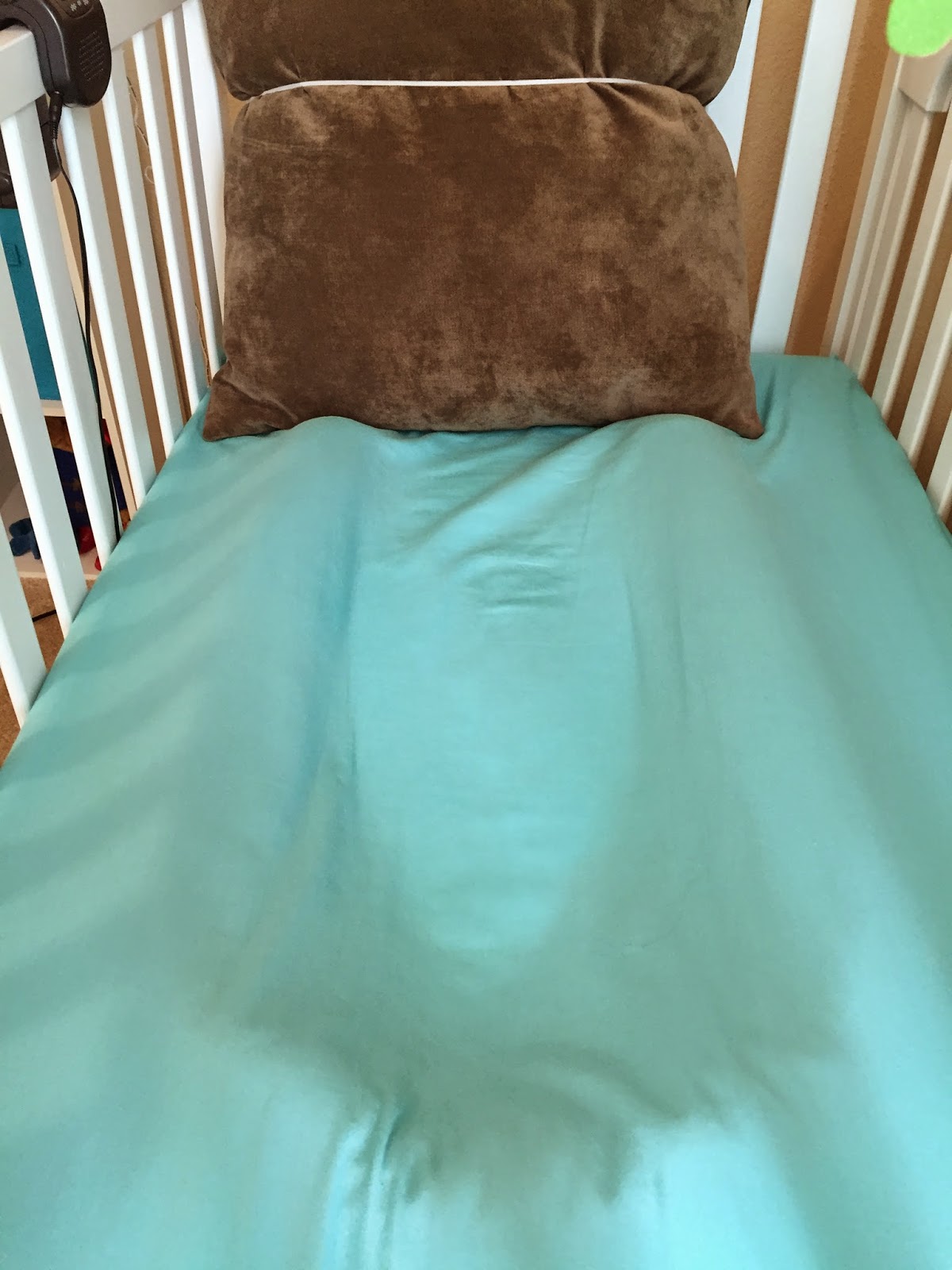 4) Put soothing vibration unit under crib mattress. We took the battery powered vibration unit out of our Pack 'n Play (yet another baby sleeping device), which has only been used for diaper changes to this day and placed it under his crib mattress instead. This made the crib mattress vibrate, just like the RNP. This unit also happens to have an MP3 player you can play soft music from if you choose.

*I'm really not certain if/how much this element played a role, because the batteries were dying and after only a couple nights he went without any vibration just fine. We have now removed the vibration unit altogether...if he's fine without it, no sense in adding it back in and continuing the habit. If you're having issues transitioning, it might help, but you also might be fine without this step. 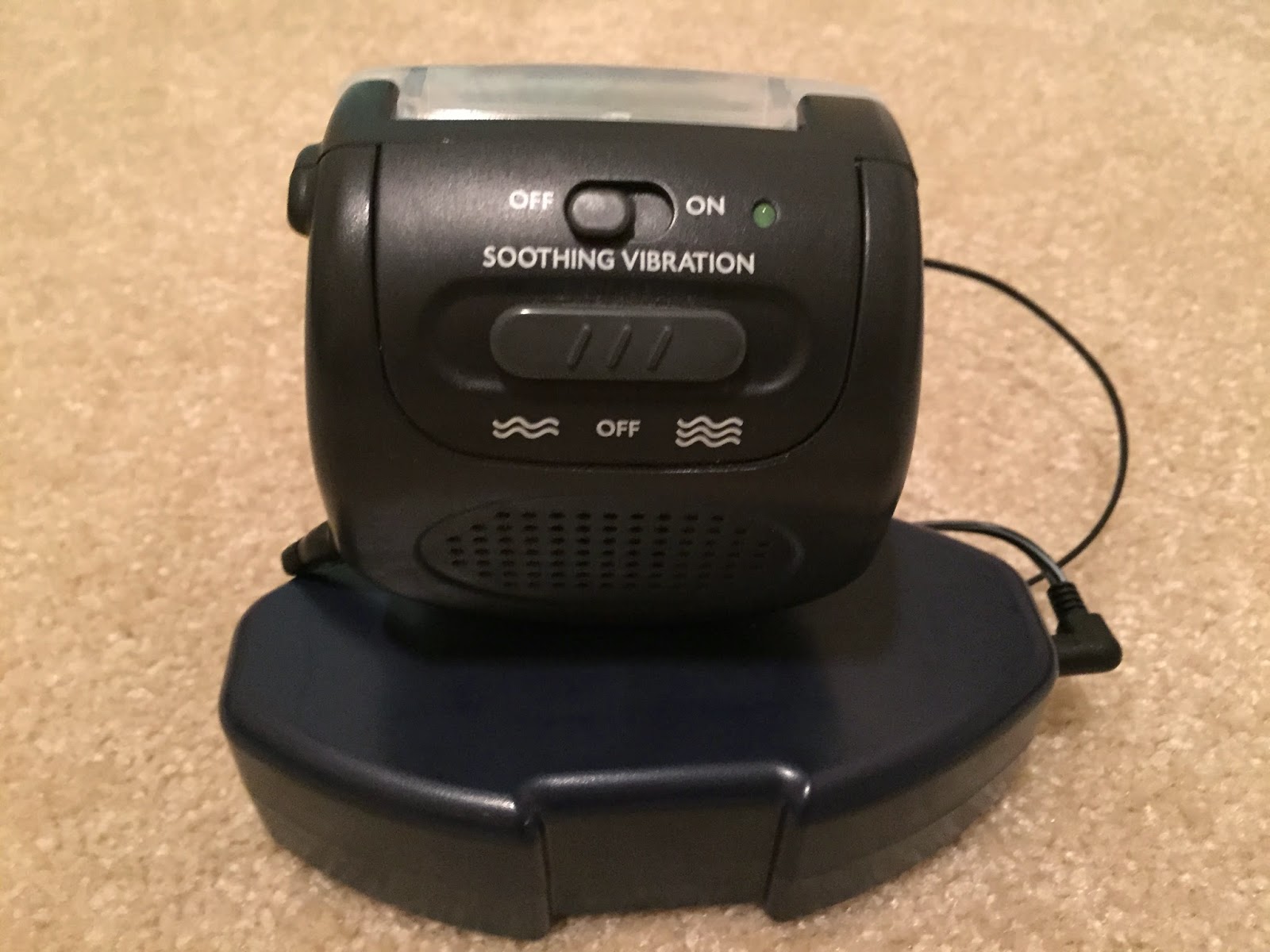 6) Placed mobile at center of crib hanging above his head. We used this mobile above his RNP prior, so it would be familiar to him. 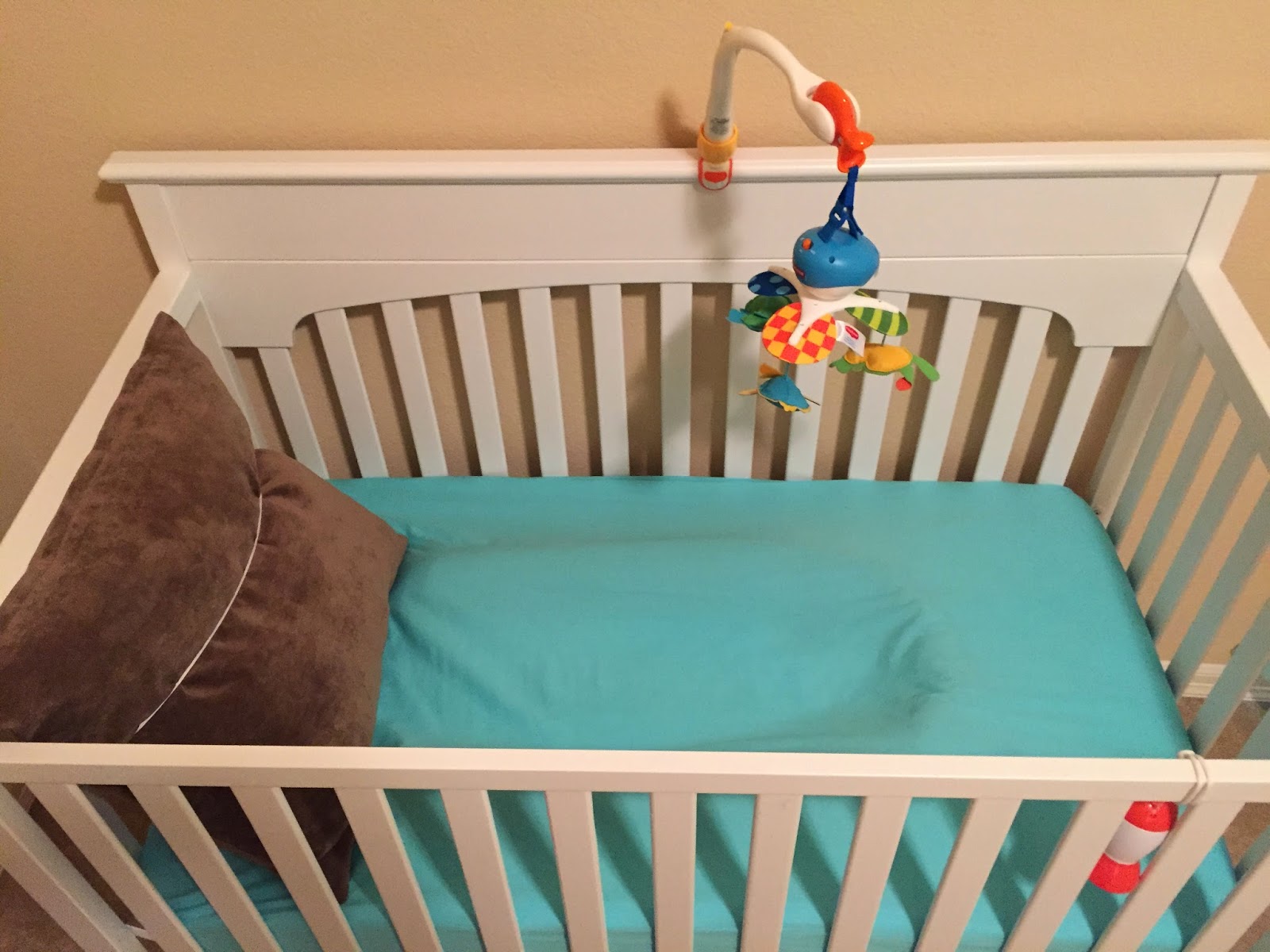 7) Hung "baby shusher" in corner near his head. I have had more than one mom roll their eyes at me for using this thing, but I don't care. It works, both as a calming measure while mid-tantrum and also a preventative measure to prevent restlessness in the first place. It has one function and one function only. It goes "shhhhhh" to your baby at increments of 15 min & 30 min. You turn it on and it literally shushes baby to sleep for you. We had used this in the RNP prior with success, so figured we'd keep it in play in the crib. When I lay him down to sleep, I just turn the baby shusher on, lights off, and leave the room. 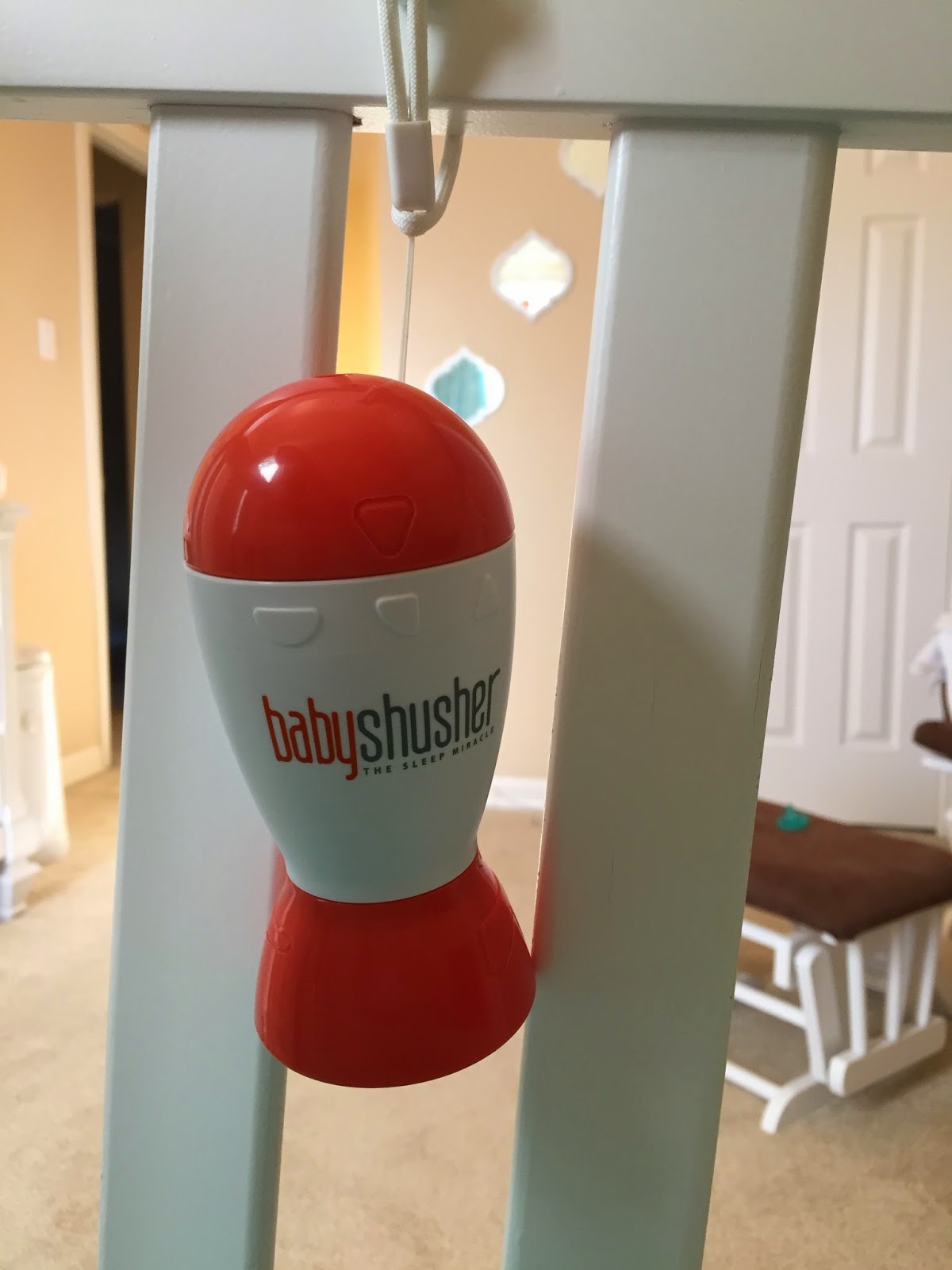 So, there you have it. Might seem like overkill just to get a baby into a crib. However, I would rather give him more than enough at first and then take away elements of comfort piece by piece, than to move to crib cold turkey with a not so pleasant experience for either of us.

The BEST part is that he seemed to sleep more restfully in his crib that first night than he even slept in his RNP. In fact, he is now going longer between feeds and has had a couple nights where he's only eaten twice throughout the night. It's been a week now, and he has slept as good or better in his crib every single night as compared to his sleep in the RNP.


We are probably still a long way from sleeping through the night entirely, but he is in his bed, in his room, and we are in our bed, in our room, on a completely different floor for the most part. It may not be perfection YET, but it's movement in the right direction!
Posted by Emily at 8:21 AM

Emily
The title of my blog pretty much sums it up... I'm slightly obsessed with food, share my feelings and heart openly with the world, and started this blog to share our hard fought mission to procreate another human being. We are now first time parents, and just learning as we go! This is my form of free therapy, where I can let it all out.